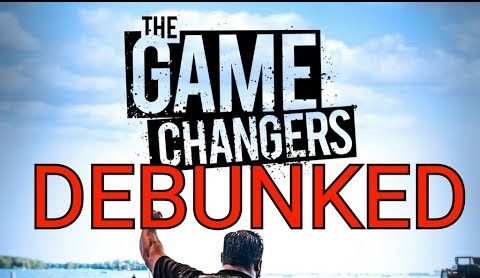 There is no doubting the fact that a plant-based diet, meaning a diet which incorporates a greater proportion of fruit and vegetables than is consumed by the average Westerner, will promote greater health and most of you will already know that we at Kineta are HUGE advocates of this diet. So where to start? This documentary was full of good TV but very limited on high quality science. It is massively biased and the underlying truth is not as simple as go #vegan despite what the producers of the ‘Game Changers’ documentary by Netflix suggests.

Don’t underestimate the difficulty of radically overhauling your lifestyle to incorporate a 100% plant-based diet – 84% of people who went vegan or vegetarian abandoned their diet. An exclusively plant-based diet requires careful monitoring, meal-planning and, when badly executed, the use of dietary supplements to cover the shortfall in nutrients. The motivation behind such a change is often a desire to lose weight, enhance fitness levels and to reduce the likelihood of an early death from the myriad of health conditions linked to the average person’s diet and lifestyle choices. All of these motives have one thing in common; if we don’t pursue these goals in a sustainable way, we will fail to maintain the commitments made to the changes required to achieve them. This results in so-called ‘yo-yo dieting’, apathy and ultimately a failure to change our lives for the better.

Anyway, back to the documentary, at this point, it would be wise to recall the ancient Greek saying that ‘Every truth has two sides’. There is absolutely no need to demonise the meat industry, which is precisely what the Game Changers documentary does, as meat – particularly when locally-reared, organic and unprocessed – provides a lot of nutritious health benefits as part of a balanced diet and in moderation.

Here are 6 ‘facts’ propounded by the producers that I think should be taken with a pinch of over-processed table salt.

Although they were mostly vegetarian, this does not mean that they did not eat meat at all. A study in 2014, discovered at least ‘minor consumption’ of animal proteins, such as meat and dairy products, by Roman gladiators and acknowledged the role that the frequent consumption of legumes by the gladiators may have played in the limited detection of nitrogen in studies of their bones, which is a marker of the intake of animal protein.

There was very little (if any) discussion on how the athletes presented developed their physiques, or the quality of their diet. With two athletes confessing a love for chicken prepared in an unhealthy way, it is no surprise that they saw an improvement in functioning when they replaced processed, factory reared meat with unprocessed plant based foods!

This isn’t a matter of superiority. Essential amino acids are the 9 amino acids that we must eat as humans since we cannot produce them ourselves. ‘Complete’ proteins (meaning that the source contains all of the essential amino acids in sufficient quantities) are those derived from animal products such as eggs, fish, meats, milk, poultry and seafood. It’s true you can get these same amino acids through a plant based diet BUT it requires a nutritionally balanced and planned approach to your diet because often plant based proteins are not complete. Given the greater challenge faced by individuals on exclusively plant-based or vegan diets to ensure that they are getting enough essential amino acids, this sort of misleading statement is just plain irresponsible.

The Endothelial Function Test used to prove that meat-based diets causes cloudiness via fats in the blood, whilst a vegan-diet preserves the purity of the blood, is highly controversial and misleading. Fats travelling via the blood is normal. Fact. As always this is about balance because too many fats is a bad thing but that wasn’t demonstrated in Game Changers. It was also claimed that “Dr Vogel’s experiment was backed up by numerous studies measuring how a single animal-based meal can impair blood flow.”

Having taken a closer look at the three studies cited during this section, each ‘study’ would be hard pushed to be classified as bona fide research given their low base but lets put that to one side for a minute. Unsurprisingly the tests were based on diets rich in processed foods including processed fats and oils such as canola oil which I wouldn’t even use to grease my bike chain.

Despite some studies highlighting a causal link between meat and cancer, the causal link is nowhere near as strong and suggesting otherwise is to overstate the case. Meat provides us with high quality proteins and essential micro-nutrients, such as iron, zinc, and vitamin B12. For me, what is arguably of greater concern is actually the quality and volume of the animal product consumed.

As with the gladiators, although early humans were predominantly vegetarian, this does not mean that meat was excluded from their diet entirely! An interesting article on the topic was published in the Scientific American back in 2012. It’s actually thought that meat was a rare treat rather than a daily meal.

When  considering the validity, accuracy and reliability of a study, you really have to look at how the data is collected and where the funding is coming from, because the concept of vested interests is precisely why I believe Game Changers was a heavily-biased documentary with more fiction than fact. That said it made for great TV and impressive viewing figures and despite the bad science it has had a positive impact in raising everyone’s awareness of plant based foods. That HAS to be a good thing!

I could go on but instead I wanted to leave you with 6 valuable points that were missed in the Game Changers documentary:

Human diet and health is a hugely complex topic. It is impossible to know everything so if you have new information to contradict the above then I am more than happy to be corrected and would love to hear from you. I’d also love to hear from those who have increased plant-based foods in their diets or made changes to their diet as a result of the documentary.